Professor Daniel MacDonald is the chair of Cal State San Bernardino's Economics department and the author of the weekly Inland Empire Economic Update email newsletter. To subscribe to his newsletter, CLICK HERE.

Jonathan Linden: You're listening to 91.9 KVCR news, and I'm Jonathan Linden. We've been talking each month was Cal State San Bernardino Economics Professor Daniel McDonald to discuss economics here in the Inland Empire. To get started here, Daniel, can you tell us what your economic indicator is for this month?

Daniel MacDonald: Sure, Jonathan. Thanks for having me here. My indicator for this month is the 30-year fixed mortgage interest rate. This is interesting because at the end of 2021, the average 30-year fixed mortgage rate in the US was around 3%. But as of early April this year, just three months later, it has jumped to about 4.6%. And that's interesting to me because the 30-year mortgage is the most common form of mortgage used by prospective homebuyers. About 90% of all borrowers choose the 30-year fixed rate to fund their home purchase. But even for borrowers going for 20 or 15-year mortgages, interest rates for those loans follow or track the 30-year rate. So, for example, the interest rate on even a 15-year fixed rate mortgage has increased from about 2.2% to 3.9% over the same period. Now, this is important, of course, also because the higher mortgage rates cause much higher loan values and monthly payments for prospective homebuyers. So, for example, here in San Bernardino County, the median home price is about $450,000. Let's say you want to buy a home at that price, and you plan to put 10% down. So, at 3%, that is, at the end of 2021, your monthly payment would have been about $1,707. But at a 4.6% interest rate, your monthly payment jumps to $2,076. That's a 22% increase in your monthly payment, making it much more costly and therefore less likely that you will purchase a new home.

Jonathan Linden: And will this have an effect on how inflation is currently here in the Inland Empire?

Daniel MacDonald: Yes, well, house prices have increased dramatically since the start of the pandemic. And that has driven the inflation in the areas well. In the Inland Empire, for example, including both San Bernardino and Riverside Counties, home prices were $395,000 back in January 2020. But again, in February of 2022, for the Inland Empire total, so this includes both San Bernardino and Riverside counties, they had risen 40% to $550,000. So that's about a $150,000 increase in just two years in the median home price. Sales have cooled down from where they were last year, and that's partly due to just recovery and kind of return to normal. But certainly, the higher interest rates are going to also affect demand for homes, as I was just saying it's much more costly now to buy a new home, and so with the higher interest rates, people are less likely to buy those homes. And that could also start to cool down the housing market and even cool down overall inflation rates.

Jonathan Linden: And will these increased interest rates have an effect on Inland Empire residents who don't even own homes?

Daniel MacDonald: It could, because if interest rates are going up, it's going to make it first of all hard for those people to move into homes if they were thinking of buying. And so that's going to put more pressure on the rental market. Because if you're not buying a new home, then you might be considering at least moving to a new apartment, and that's going to drive up rents as well. So even for people in the Inland Empire who are not buying or not thinking of buying in the near future, the fact that these interest rates are going up could put pressure on the rental market and therefore drive rents up as well.

Jonathan Linden: And did you have any closing thoughts on how interest rates will affect the Inland Empire economy?

Jonathan Linden: Well, as usual, thank you so much Cal State San Bernardino Economics Professor Daniel McDonald for taking some time to join me.

Daniel MacDonald: Thanks Jonathan; it was a pleasure. 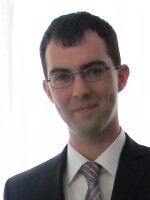