Would you trust your smartphone to guide your drinking habits?

A lot of people are doing just that. With many of us glued to our digital devices for much of the day, web developers and medical researchers are taking note of the potential for harnessing our phones, tablets and laptops as tools to moderate drinking, or stay sober after quitting booze.

Web-based drink tracking and alcohol control programs have mushroomed in recent years, ranging from the whimsically named R-U-Buzzed? app for iPhone (which claims to calculate when you're too buzzed to drive) to the University of Wisconsin's A-CHESS addiction recovery app (which, among other things), uses your phone's GPS to warn you when a bar is nearby). Others send motivational text messages to promote abstinence, and still more count your drinks and calculate your risk.

Take for example Checkup and Choices, an online drink tracking program developed by Reid Hester, a clinical psychologist based in New Mexico.

The program gauges users' habits and risk of health problems with a confidential survey, then directs them to a smartphone-friendly website where you can record your drinks, your mood while drinking, and your urges. Afterward, you're left with some objective data to help you assess your habits.

"People can and do change their drinking all the time," Hester says. "It's a matter of being willing to take a close look at your drinking, getting some objective feedback, really thinking about it, and then deciding what, if anything, you're going to do. Many, many people change their drinking on their own, but they need a catalyst to trigger that process."

Hester developed his approach after years of research and clinical trials. It's listed as an evidence-based program by the Substance Abuse and Mental Health Services Administration — something not a lot of the apps and websites out there can say.

"There are also many web applications and phone apps that have no evidence whatsoever of effectiveness," Hester says. "I just think that's immoral and unethical."

But how is a consumer to know?

Kimberly Johnson, who directs SAMHSA's Center For Substance Abuse Treatment, says it takes a lot of research on the part of the customer to find out if the app they're about to download is any good.

"Unless the people that developed it put in their description that it was tested in a randomized trial," she says, "there isn't really anything on the app store that says that."

The bigger question, Johnson says, is what people are looking for in a treatment situation. There is no one-size-fits-all approach. For some people a communal setting like Alcoholics Anonymous is most effective; others need a one-on-one relationship with a therapist.

"If you're seeking empathy and rapport from another person, a computer probably isn't going to give you that," Johnson said.

But Web-based programs do have their advantages. For one, research has shown that people may be more honest about their alcohol consumption when they're using a computer. The lack of interpersonal interaction takes away the incentive to fib about your drinking habits, which can lead to a more accurate assessment.

Using the Internet to tackle your drinking problem has another plus: You don't have to drive to the doctor's office or the group meeting. That can be big, because especially for people with lower incomes or who live in rural communities, just getting to your appointment can be major hurdle.

"The number one thing we get asked for help with is transportation issues," said Caitlin Donovan, spokeswoman for the National Patient Advocate Foundation. "People can't get to their doctor because it's too far away or it would take too much time to get there. It's a big problem."

But the people who might benefit most from the convenience of apps and websites often face the biggest challenges in accessing them.

The challenges are manifold, starting with affordability of phone data or Internet access and the quality of coverage, which can be unreliable in some city neighborhoods and even worse in rural areas. And, of course, you have to own a smartphone or a computer to use the programs.

If you're able to get past those issues, there's still the problem of cost: Well-researched, medically sound programs can take a lot of money to set up and maintain, which means they're likely to charge fees for use.

That's what happened with Hester's program. He initially tried to offer it for free, relying on donations instead of charging fees. But maintaining the site was too expensive, even after the research was done. "We weren't even keeping the lights on from the donations," he says, "so we had to go back to a paid model."

Donovan says the costs do risk keeping the programs that actually work out of reach for people living below the poverty line: "Unless you're talking about 99 cents, it's probably going to be a barrier for a lot of people."

Even if the right program for you isn't out there today, there are many more options on the horizon. "Health care in general, and treatment specifically, are increasingly moving online," says Johnson of SAMHSA. That leaves a lot of room for innovation. 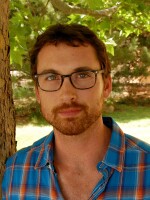 Ed Williams
Ed Williams came to KUNM in 2014 by way of Carbondale, Colorado, where he worked as a public radio reporter covering environmental issues. Originally from Austin, Texas, Ed has reported on environmental, social justice, immigration and Native American issues in the U.S. and Latin America for the Austin American-Statesman, Z Magazine, NPR’s Latino USA and others. In his spare time, look for Ed riding his mountain bike in the Sandias or sparring on the jiu-jitsu mat.
See stories by Ed Williams
LATEST STORIES